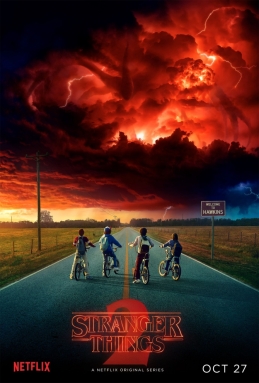 Devoured in two sittings, much like the creatures in this horror show devour humans, I watched Season 2 on Netflix.  I’m currently in recovery mode and slightly disturbed.  Is Season 2 better than Season 1?  You betcha, Netflix, and you’ve succeeded in scaring the bejeebers out of me in the process.

All right, readers, you want spoilers?   It doesn’t take long to see that Will is disturbed by his prior adventures, leaving him with PTSD so they say. Frankly, it gets even worse as he tries to face his fears and ends up becoming consumed and possessed.  Boy, the kid can act!

The other boys who play the quirky unwanted geeks of middle school once again steal the show. The elder teenagers continue with their drama of boyfriend/girlfriend sagas. Then there is the Sheriff and 11, living out their lives not so quietly in the forest.  Will’s mother is in love again with an all-around nice guy.  Instead of stringing lights around the house be prepared for the next insanity to fill her walls. Eventually, things go terribly wrong at the mystery company when the other evil side continues to extend its terror underneath the ground and breaks through to take over the world.

A lot of focus is also on 11 aka Jane as she searches out her mother, attempts to find her place in the world, and rediscovers that she really wants to be with her friends because they need her.  Truths are revealed.  She can really channel her anger in frightening ways, which almost makes me jealous.  I could certainly take care of a few problems with that kind of power.

Season 2 has enough scare factor for Halloween to make you comp on that buttered popcorn in a frenzy.  You may exclaim a few choice swear words and mumble the following.

Why are you going down there?
Get out of there, dummy!
OMG, that’s gross!
What the hell?
It’s eating the poor …!  (inserts tears)
Everybody is going to die!

Well, you get the picture.  Frankly, the episodes are so intense it’s probably a good thing they are short rather than an hour long.  My sick stomach needs to recover from all that goo and flesh-eating monsters taking over the world.  Yes, in parts I really did get nauseous but it was worth it, keeping me on the edge of my seat.

Will there be a Season 3?  It’s hard to tell as it really didn’t hang very “cliffy” if you get my drift except for another sight of the whirling evil waiting in the dark.  No doubt, it wants another chance to take over the world.