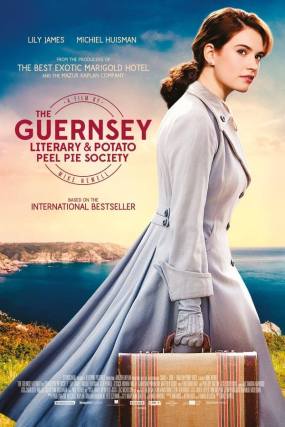 I have been overdue for a good period drama and waiting patiently for the release of this film. In anticipation, I ordered the book but found it to be a compilation of letters and not written like a regular novel so I put it aside.

After seeing the trailer for the movie version, I’m so thankful it’s finally out.  There’s no disappointment whatsoever in this touching story staring Lily James.  As usual, I find her adorable, and her performance goes well in this sometimes heartbreaking story that eventually has a happy ever after.

The story is about Juliet Ashton, an author from London, who receives a letter after the war in 1946 from a peculiar group of people who calls themselves The Guernsey Literary & Potato Peel Pie Society.  They are a book club that was formed on the Isle of Guernsey (a British island in the Channel), during the German occupation.  Curious about the group, Juliet travels to the location to meet those who make up the book club. In doing so, she learns of the years of occupation in which they endured and a very sad story about one of their members.

The story jumps back and forth from the present to the war, giving insight as to what actually happened to the characters now speaking to her in 1946.  Juliet wants to write about their experiences, but the club would prefer that she does not because of the pain it represents in their lives.

The others who star in the movie are some of your favorites, such as Tom Courtenay, Katherine Parkinson, and Penelope Wilton who does a wonderful job in her role. Add to the cast is Matthew Goode, and you have a well-rounded, experienced group of seasoned actors.

Though you may find the movie a bit slow in parts, it’s worth the scenes to take the slow walk on the beach or run around the pig pen to get the feel of the location and its people.  If you’re a period drama junkie or enjoy WW2 stories, check it out on Netflix.

I can’t believe that I haven’t written a review on War & Peace on my blog!  Of course, I put my two cents on Amazon but must have lost my senses over the handsome Prince Andrei dancing with Natasha.

This is my first viewing of an adaptation of War & Peace and an honest confession that I have never read the book. Though I knew the underlying story, seeing it on screen is another matter altogether. I cannot judge what is shortened, changed, good, or bad in comparison to the written original. Nevertheless, I am able to make a judgment on the BBC version even with my lack of Russian literature experience.

Since I did not have BBC, Lifetime, or wherever else it streamed, I purchased the episodes on Amazon for $2.99 each.  You can buy the entire series for $19.99, if you wish to stream it from Amazon or the DVD now for sale.

The first episode I found rather boring and slow, which nearly made me leave the remaining episodes untouched. Camera work and costumes were a bit out of sorts. If you don’t mind visions of the camera whipping you around in circles, you can get through it. As far as costumes, my first impression ranged from good to “gosh that looks awfully modern to me.”  There are many recognizable stars in the production, but those who shine are Lilly James, Paul Dano, and James Norton – UK’s newest heartthrob.

The second episode finally drew me into the story as the lives and personalities of the characters begin to unfold. By the time Andrei whirls Natasha around the ballroom dance floor, I found the perfect romantic beauty one hopes for in period drama. Of course, much of the romance is tempered by the brutal reality of war. One can romance in peace and then lose the one you love in war.

Paul Dano is a rather strange character as Pierre. At first you are not quite sure if he will do the part justice. However, by the time he’s starving and eating a raw potato, you will be reaching for the tissues.

Some of the lines are very thought provoking, thanks to Leo Tolstoy’s epic novel.  After watching years of war and peace weave back and forth into the lives of the characters (no thanks to Napoleon), these lines become even more meaningful.

“When our lives are knocked off course, we imagine everything in them is lost. But it is only the start of something new and good. As long as there is life, there is happiness. There is a great deal. A great deal still to come.”

If you don’t mind the slight slowness and oddities here and there, this is a well-acted and thought-provoking story of life in Russia in the early 19th century.