3 Kernels for the Show – 1 for the Stupid Ending

I don’t think I’ve ever watched a television series that has left me so bleeping mad that I cursed at the end and screamed, “what the hell?” BEWARE, before you tune into this BBC mystery now streaming on BritBox. They canceled the bleeping show and left everyone hanging at an extremely critical point in the story. Before you invest yourself in six episodes, please be aware it’s going to cause you to swear at the end.

After saying all that, it’s a story about a woman who returns to find her long-lost son who she gave up for adoption 32 years earlier.  Apparently, it’s based on characters from the soap opera EastEnders, which I haven’t watched. It’s filmed in Ireland.

As the story unfolds, it’s a fairly good mystery with a few surprising twists that kept my interest through the six episodes. It’s the ending that leaves you hanging, but apparently the question of “survival” is answered upon the return of the characters to EastEnders, which I’ve not seen.  I can only say it’s a rotten way to treat the audience and poor planning for those who are not invested in the soap opera or its characters.  Frankly, it’s down-right cruel RTE One and BBC One.  What were you thinking?

If you want to read more about the show and episodes before investing the time to watch it with the full knowledge of the outcome, I suggest you travel over to old Wikipedia. 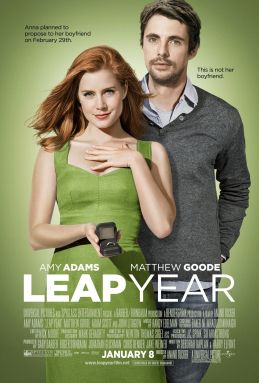 Bored on a Friday night, I scanned Netflix for something lighthearted to watch.  I came across Leap Year, which I’ve seen twice before.  It’s been a leap year since I’ve watched it, and once again it didn’t disappoint.

For me, there are only a handful of endearing romantic comedies that have stuck with me throughout the years.  To name some of my favorites – there is The Holiday, Serendipity, and Someone Like You.  They are romantic “fluff” as I call them.  Light, airy, not much substance, but filled with a few good laughs laced with happy mushy endings.  There are other romantic comedies I can think of that I like, but some of them have a tad of sadness attached to the story (example, Return to Me).  I like the romantic comedies that leave me with a smile, and Leap Year I have added to my list.

Amy Adams plays Anna, a posh Bostonian who has been dating a cardiovascular surgeon for four years by the name of Jeremy.  They are rich, upper class, and wishing to move into together at an exclusive apartment complex in New York City.  Amy, however, has been waiting for Jeremy to propose but he never gets around to it.  When he tells her he has a surprise for her when they are to meet for dinner, she assumes he’s going to pop the question.  Instead, he pops a gift of diamond-studded earrings.

Depressed and despondent that he is still dragging his feet, her father tells her the story again about how her grandparents came together.  The Irish tradition of a woman asking a man to marry is an option. Of course, it just happens to be a leap year.  She dismisses the ridiculous idea, but the more she thinks about it, the more romantic it sounds.

After Jeremy travels to Ireland for a medical conference, Anna decides to do just that – get to Ireland by February 29 and ask him to marry her.  However, everything goes wrong and her flight to Dublin is diverted because of bad weather.  She ends up in Wales, takes a ferry over a stormy sea to Ireland, and eventually ends up in some small village on the coast far away from her destination.  It’s here she meets Declan (Matthew Goode) a pub owner who agrees to drive her to Dublin for money.

Of course, the humor of the movie is that everything goes wrong from the very instance she steps onshore.  The trip that should have taken a day ends up taking days, which puts the two of them together for more than they care to be.  Naturally, feelings develop, and by the end, Anna must make a decision about what is really important in life.

So yes, it’s fluff.  Cute fluff.  I’ve always like Amy Adams for the most part.  Recently, we’ve seen Matthew Goode in other memorial roles such as Downton Abbey, so he’s easy on the eyes. It’s definitely not an award-winning movie, but as a romantic comedy, it goes well with popcorn.

Oh, and if you wish to ask a man to marry you, gals, you missed it in 2016, which was the most recent leap year.  You’ll have to wait another four years, until 2020, to get that extra day in February.  Apparently, it is an old Irish custom where St. Brigid made a deal with St. Patrick to allow women to propose to men every four years.  So there you go! 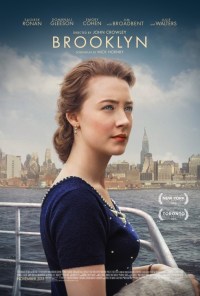 Stars:  Saoirse Ronan, Emory Cohen, and Domhnall Gleeson
This past weekend I went and saw Brooklyn, which is a story of a young Irish woman, Eilis Lacey, in the 1950’s who leaves her sister and mother and travels to New York.  Encouraged by her sister to look for better opportunities, she embarks on an adventure across the pond as a young and innocent young woman on the road to maturity.
As she settles into her new job as a store and parish church, she meets a young man who likes Irish girls.  He, on the other hand, is Italian and a plumber.  They fall in love in an endearing sort of way, but are threatened to be pulled apart when Eilis’ sister suddenly passes away and she must return home.  Afraid that she won’t return, her boyfriend Tony convinces her to marry him in a civil ceremony before leaving.
Once Eilis returns to Ireland, she is pressured on every side by her mother and friends to remain. Her heartstrings are tugged upon as she realizes that she has missed Ireland and begins to struggle with returning to the states after developing feelings for another fellow.  However, no one knows that she is secretly wed, until she confesses it to her mother after experiencing a harsh reminder of what life is like in her little town.
The movie is highly rated at 98% on Rotten Tomatoes and with a 92% approval from the audience.  Why am I not crazy about it?  I can’t put my finger upon it, frankly.  The movie was a bit boring and slow to me in spots and for some reason didn’t tug upon my heartstrings as it apparently has done to others.  I just didn’t find the movie one of those memorable ones that will stick with me for some time to come.