ITV’s dramatisation of the unfinished novel has offended the sensibilities of many Janeites. Alison Flood wonders if this makes sense

Source: Sanditon: why are Austen fans so enraged by Andrew Davies’ ending?

Soon Sanditon will be coming to PBS and those of you in the USA will be able to watch this production (January 12, 2020).  Having seen it myself, I can say there is much to enjoy and much to cry about as well.

Sanditon is a continuation of Jane Austen’s novel, but you’ll only see the first episode cover the eleven chapters she wrote. From there, the story unfolds from another pen — well many pens from book adaptation to screen.  It’s an engrossing story, not only about the main love interests of Sidney and Charlotte, but a story of endeavor, greed, foolishness, love, jealousy, and a myriad of other emotions all rolled up into wonderful characters. It will eventually grab onto you, hold your interest, and then break your heart cruelly at the end.  It has nudity, sexuality, and a few shocking scenes.

Those who enjoyed the series have ranted and raved about the ending, and are now campaigning, insisting, and stalking ITV, the stars, writers, and producers to finish the story in Season 2.  My gut tells me they won’t, but we’ll see.

The story is grossly unfinished, just as Jane died before finishing the book.  Is it worth watching?  Sidney and Charlotte’s journey is definitely worth the watch, the changing of a hurt man’s personality, the growing into womanhood of a young girl, laced with touching and beautiful scenes that will sweep you away in Episode 7 and early in Episode 8. There will be characters you love, hate, and could punch for their foolish ways. It’s heartbreakingly lovely altogether, and Sidney Parker definitely gives Mr. Darcy a run for his money.

Two new items coming out for World War II.  One on BBC and eventually PBS Masterpiece – World on Fire.

And a second to hit the big screen, Midway. Mark your calendars for a history class.

Looking forward to both!

I have been anxiously waiting for this movie to stream on Amazon in the United States.  Since today is the anniversary of Peterloo (August 16, 1819), and my ancestors are from Manchester, I checked to see if it was finally available.  Alas, it is on Prime now to watch, but unfortunately, much of the movie is a massacre as well.

Because this is such a historical event, I had hoped to enjoy the film. My ancestors were poor, and parts of the movie broke my heart frankly. Though they lived in Manchester around 1850’s and onward, which is much later than this occurrence, it still tugged at my heartstrings because I knew they struggled in some of the poorest areas of the city.

The movie is long, but contains quite a few familiar faces of English male actors. Directed by Michael Leigh, it appears to have been praised in England (read here The Guardian’s Review), I personally found the film tedious and poorly acted in many scenes. If you love to listen to great orators of the English language, you may be enthralled by some of the speeches. Frankly, I was impressed by their ability to memorize and deliver such large portions of script.

The movie, 153 minutes long, is filled with talk, speeches, and not much else, until 60,000 to 80,000 people gather for a peaceful demonstration to hear pro-democracy rhetoric by radical orator Henry Hunt, who called for parliamentary reform and repeal of the corn laws. If you wish to read the historical account, good old Wikipedia has a page on the Peterloo Massacre.

The sad end is the last fifteen minutes of the movie watching the Calvary arriving to drive the crowd away. Of course, they drew their sabers and history records eighteen dead and 400-700 injured.  I would have thought that tidbit of information would scroll at the end of the film, but it did not. It ended with three journalists from London, Liverpool, and another paper (Leeds, I think), talking about writing a story about the Peterloo massacre. It was termed that because the aftermath looked like the battle of Waterloo, only it happened in St. Peter’s Field.

Sadly, I do think the movie could have been better and more engaging. Instead, it became a snooze fest for me, and I did fast forward through a good thirty minutes of it to get to the part where everyone assembles at St. Peter’s Field.

What we can take away from the story, though, is that this was a dark period of cruelty perpetrated against the poor who only wanted a better voice in the House of Commons.  Instead, they were silenced by the swords, and men, women, and children died all because they wanted more food on their tables and better lives.

Source: The Current War, a Weinstein Company Casualty, Will See the Light of Day

The screenwriter says he used all the material from Austen’s work in the first half of the first episode.

Let’s get something straight. Whenever somebody suggests that I watch a play by Shakespeare, I usually run the other way. Except for Romeo and Juliet, I’m pretty much Shakespearean ignorant. With a mere high school education and no college course to make me study literature, his famous works have not been on my top-ten to-do list.

Have I watched Hamlet before? I’ve tried. I’ve read the synopsis and snoozed through it, as well as started to watch it on television and snoozed through that or turned it off.  Now, take the same story, and have it told through the eyes of a woman, Ophelia, and you’ve got my attention.  As IMDb says, “It’s a re-imaging of Hamlet, told from Opehlia’s perspective.”  Apparently, it’s based on a novel by Lisa Klein.

The movie was directed by Claire McCarthy and stars Daisy Ridley (Ophelia), Naomi Watts (Gertrude), Clive Owen (Claudius), and George MacKay (Hamlet). It’s a well-done movie with beautiful cinematography, costumes, and acting.  You don’t need to worry about that old-English Shakespeare speech either, as the dialogue is understandable.

Since I’m not crazy about Shakespeare, I do appreciate those writers and directors who have the boldness to take old works and modernize them just enough for us who don’t have a master’s degree in literature to understand and appreciate the stories.  It helps us little folk without all those fancy degrees actually enjoy it on our level of understanding.

If you’re looking for a classic tragedy (and believe me the ending is tragic enough to illicit a tear), you might want to watch this fantastic movie.  I thoroughly enjoyed it.  Where can you watch it?  Check it out at Ophelia: Watch At Home.  I rented it off Amazon for $5.99.  Cheaper than a ticket at the theater and you make you own popcorn free.

Also, perhaps the picture below will jog your memory about her story. 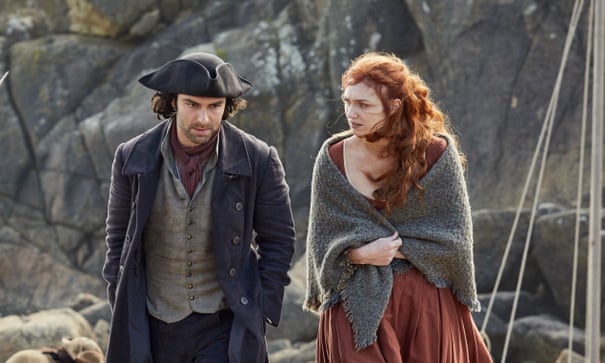 With fifth series coming to screens next month, ‘door has been left open’ for show to return in future

Source: ‘Final’ series of Poldark may not be the last, says writer | Drama | The Guardian

I finally had the opportunity to watch The Wife, streaming on Starz.  If you are an author and haven’t seen the movie, you may wish to check it out.

The movie is based on novel of the same name, and stars Glenn Close, Jonathan Pryce, and Christian Slater.  Glenn Close plays the wife, Joan. Her husband, Joseph Castleman, has been awarded the Nobel Prize in Literature, and they travel to Stockholm with their son for the award ceremony.

It’s a convoluted story, with flashbacks from the present to the past. Flashbacks include young Joan, who falls in love with her professor, Joseph. He teaches writing, but Joan is actually the talent between the two.  Set in 1960, Joan is faced with the reality that most publishing houses are not interested in female authors.  However, she is driven to write.

In a poignant conversation with an author at a reading, come these lines. They are spoken in a conversation between the young Joan Castleman and an author by the name of Elaine Mozell, who is disillusioned with the publishing house gatekeepers (those rascals are still around by the way).

After Joan marries Joseph, who attempts to write a book, she helps to rewrite his poorly devised first draft.  As the genius between the two, and because he is a male, the book gets published and it a runaway best seller.  As the years follow, Joan writes, while he keeps house and watches the kids. Now that they are in their twilight years with grown children and grandchildren, the Nobel Prize is now Joseph’s crowning achievement. No one is wise as to who really wields the pen in the background, except for another author who wants to write Castleman’s biography.

Joan, of course, is frustrated after years of living with a narcissist husband who takes all the credit for her hard work. He’s been unfaithful to his wife throughout the years — just one of those men who can’t control his urge to stray.  But Joan, you see, has been the good wife, until finally the typewriter ribbon of life breaks and she’s had enough.

Glenn Close received multiple nominations and awards for her performance. I will say that I’ve not always been a fan of hers but she is outstanding in her performance.  The movie is also fraught with dysfunctional family ties between father and son, which becomes part of the conflict but not the central story.

In any event, I write this review because I have to write, and I love to write.  The problem is when you are an author, you really are driven to write.  You attempt to stop.  I know I do when sales on my books suck, and no one reads them.  I mean what’s the point? A writer needs to be read. I tell myself the same story — don’t do it.  Just give it up.  Of course, I don’t heed that advice.