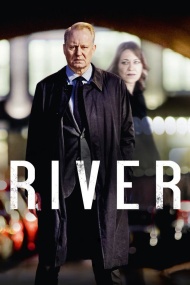 Binge watching is no doubt bad for your health.  Sitting for hours in front of the television.  Snacking on ice cream, popcorn, tea, toast, and whatever else you pop up and run to the fridge for between episodes.  However, when you’re sucked into a program, waiting for the next episode is just too damn hard.

Be forewarned this could happen to you if you tune in and watch River now streaming on Netflix.  You may end up on your derriere for hours watching this show in order to find out the secret behind the death of Detective Sergeant Jackie “Stevie” Stevenson, played by Nicola Walker (who you probably know better from Last Tango in Halifax).

Stellan Skarsgard, an excellent actor who I’ve seen in other roles, plays Stevie’s partner, DI John River.  He witnesses his partner getting shot in the head in the middle of the street and spends the remainder of the show attempting to unravel the reason why.  However, River is a troubled man with a strange psychological problem.  He is haunted by manifestations of people who have died in previous investigations. If that isn’t bad enough, he is mentally tortured by his dark, characteristic inner self (played by Eddie Marsan), which nearly pushes him to the brink of insanity.
River, however, is a brilliant detective.  Stevie’s death drives him to find her killer at any cost, while her manifestation accompanies him during the entire process.  The story, well-written, with in-depth characters and twists and turns throughout, carries its audience on a tale with a surprising end.  He is fortunate enough that his work-place psychologist, who is helping him through his grief, passes him in his evaluation to continue his investigation.  All the while, she knows he sees manifestations of dead people.
Side plots include River’s boss, played by Lesley Manville, who you will instantly recognize from North & South as Margaret Hale’s mother. Her performance here is quite different as a driven woman in the police force, whose portrayal is top notch.
The show is well worth the watch at a healthy pace or binge watching.  As you know, I love British crime series, and this one goes to the top of my list.  Excellent story.  Stellar acting.  Engrossing story.  Well done, BBC.