4 Kernels
British TV (2004-2005, 12 Episodes)
Stars:  Lisa Faulkner, Caroline Catz, and Jeremy Sheffield
Anything that puts a smile on my face and gives me a good laugh once in a while deserves four kernels. Though it seems this two-season British TV series was cancelled and doesn’t have that many rave reviews, I can say I thoroughly enjoyed the Netflix streaming of Murder in Suburbia. Hey, as long as I’m entertained, I don’t care what the critics say.
Murder in Suburbia is about two detectives, DS Emma Scribbins (played by Lisa Faulkner) and DI Kate Ashurst (played your favorite Dr. Martin’s Caroline Catz), who are partners in the fight against murderous crimes.  Though the murder plots are par for the course, the bantering between Emma an Kate is far worth the watch. They complain about being single, they both have a crush on their boss – more so with Kate, and the boss is always on the edge of showing his interest in them as well.  Of course, it’s the work place and one must not cross the line. 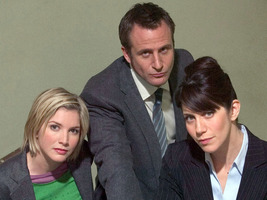 There are subplots to each episode of murder, mostly made up of their dating escapades and looking for the right man.  Kate seems to always run off at the mouth at the wrong time in front of DCI Sullivan (Jeremy Sheffield), her boss. In one particular funny episode, she complains about needing sex and wouldn’t mind paying 500 pounds for a male prostitute.  After she yells that to Scribbins as she’s about to open the door to her apartment, she discovers her boss is on the other side.
Most of the encounters are humorous, but the last episode was frankly priceless.  I may watch that one again.  It’s too bad it got cancelled, because I would have loved to seen the story continue between Kate and Sullivan.
Nevertheless, each to their own. If you’re into a little humorous bantering between two women on the job, cold-blooded murders (most of which I got the who-done-it wrong), you might enjoy this lighthearted murder in the suburbs of the United Kingdom.
British TV…what can I say…priceless.