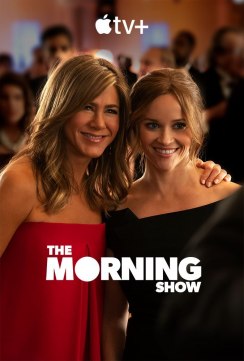 Well, I finally gave in and subscribed to Apple TV.  No, I don’t have an Apple computer or television that can run Apple TV. I have a workaround with my Chromebook Acer streaming Apple TV and then hooking up an HDMI cord to my Sony Television (that cannot get Apple TV) and mirroring my computer to my TV.  It’s a complicated workaround, but it streams shows otherwise I would not be able to (i.e. Prime TV which hates my Sony Google television). I subscribed to Apple TV so I could see the new Greyhound WW2 movie being released exclusively on Apple TV on July 11. If Apple TV continues to produce good television, I may keep the subscription far beyond.

In the meantime, I tuned into The Morning Show, starring  Jennifer Aniston, Reese Witherspoon, and Steve Carell, among others. Each episode runs for approximately an hour and there are ten in the series. I binged all ten in two days, which speaks for itself. The story revolves around a fictional network and a morning show that has broadcasted with the same two hosts for fifteen years – Mitch Kessler, played by Carell, and Alex Levy, played by Jennifer Aniston. The show opens with Mitch Kessler being fired for sexual misconduct. The story is spawned midway through the “me too” movement where heads at corporations were rolling left and right in the USA. However, this fictional tale is much more than sex in the office, it’s a conglomeration of a variety of personalities who work on the show all vying to keep their jobs or move up the corporate ladder.

Alex Levy is a narcissistic co-host who goes to extremes to keep her job on the show after Mitch’s dismissal. She possesses a loud, self-serving, rude, in-your-face personality that is offputting, but eventually finds redemption in the end. Already the executives want to push her out, but she is savvy enough to save her career during a wild announcement.  I will admit that I thoroughly enjoyed this series, giving it five stars. The acting was great, the episodes engaging, and the outcome of seasons end an explosion of emotion.

Bradley Jackson, played by Reese Witherspoon, is a nobody from a small station who gains the attention of The Morning Show by going off on a tirade doing an interview. Seen as fresh blood that can infuse the show with spirit, executives move behind the scenes to have her fill Mitch’s place. However, Alex, already threatened to lose her job wants a say in who will fill the empty chair. Eventually, Bradley becomes her cohost, and feathers everywhere get ruffled.

Meantime, Mitch is attempting to play his cards to save his ass from being a predator of women, when really he’s a rogue who smooths talks women into bed at the workplace. He has left behind a list of used women, but can’t seem to admit he’s part of the problem. Everyone’s relationship was consensual, and in his mind, he’s just a sacrificial lamb for the network.

The only caveat I have about the show is the F-bomb is continually thrown around, but there are no gratuitous sex scenes to worry about.  Only one scene where Mitch seduces a young employee is played out but it’s not overly skin revealing.

I enjoyed the series and highly recommend it. Apparently, there will be a season two.