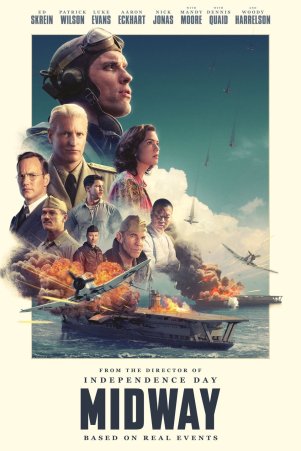 Sometimes I really don’t understand critics or what they expect. Thank goodness, I didn’t listen to them and went and saw the movie after seeing the high audience rating. I don’t think I’ve ever shed a freaking tear at the end of a war movie but I did at this one.

My father served in the south Pacific during WW2 in the army. He was fortunate to come home alive. However, watching movies like this really takes an individual into the center of the horrors of war and being able to see and deeply appreciate the brave young men who turned the tide of the war around in decisive battles like Midway.

Needless to say, the visual effects were stunning and those dive-bombing fliers were something else. What brave men! The lack of character development complained about by critics is pish-posh. They failed to apparently read the credits at the end about the real men portrayed in this movie and their character who saved our country from possible invasion had we lost. I didn’t really care about the script complaints either. What I did care about, was the reminder and deep sense of gratitude this move left me with at the end when I departed the show, thanking lives long gone.