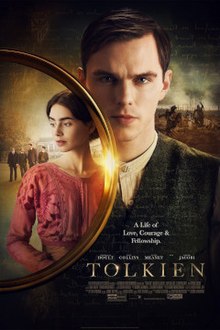 I had high hopes seeing this movie about the famous author but came away somewhat disappointed in the outcome. It has its good parts, drawn out boring parts, undeniable heartfelt parts, but also horrific parts. It focuses on the young life of Tolkien from boyhood to young adult, ending with the time he wrote Hobbit.

The movie, I think, makes the mistake of too many flashbacks from the present to past, leaving you dizzy in the changes. It begins with Tolkien in the trenches suffering from trench fever, desperately attempting to find a friend (one of the three he has a “fellowship” with from boyhood) serving during WWI.  What he sees around him are the hallucinations of his mind, that often correspond to his future stories – fire breathing dragons, death riding a horse, spirits of black whirling over the dead carnage. The scenes from the trenches are horrific to say the least, with pools of blood and dead young men strewn across the battlefield. If the director wanted to make the point of the horrors of WWI, he did so to the point I moaned at many of the scenes.

After his mother’s untimely death, his priest arranges for him and his brother to be fostered by an elderly lady. He is sent to school but at first has trouble making friends. Eventually, he becomes part of a group of boys, who grow into manhood, that consist of three other creative minds – writer, artist, composer. They form a bonded fellowship, out to change the world.  There are many scenes of his boyhood and young adult life to university with his friends.

The movie ends years after the war and the aftermath it had on the four men.  Not all return home. Tolkien is married to his childhood sweetheart, now with children, and mulling over fantasy stories in his head, beginning to write his famous works.

I wasn’t overly impressed with the movie, although it was interesting to see the beginning life of a literary genius.  Nicolas Hoult did a fine job portraying Tolkien (that’s pronounced Tol-keen) by the way.  If you admire his books and stories, you’ll enjoy the movie nevertheless.