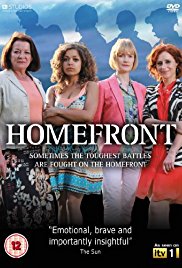 Homefront, is another series on Britbox that didn’t keep my attention. I struggled to watch the episodes until the end, which revolves around the lives and melodrama of four army wives in the UK.  Their husbands come and go from Afghanistan throughout the series. Since I enjoyed The Last Post, I was looking forward to this series but it fell flat.

The basics are a young wife who loses her husband and the ensuing inquest into his death overseas as the family members cope with the loss.  A woman engaged to a major who can’t decide whether she’s army-wife material.  Two teenagers acting out.  Then, the usual, drama of infidelity and a wife who can’t make up her mind whether to forgive or kick him to the curb.

In order to pinpoint my disappointment, I guess it lies with the story, the acting, and the unnecessary and somewhat boring scenes that lead to a snail’s pace of a show.  There is really no empathy for any of the characters, even the wife of a dead soldier.

Sorry on this one — don’t have very much redeeming accolades to give for this poor soap opera quality.  Not surprised it wasn’t renewed.  It’s easily forgettable.

Signing off on a short and somewhat sour commentary on Homefront.