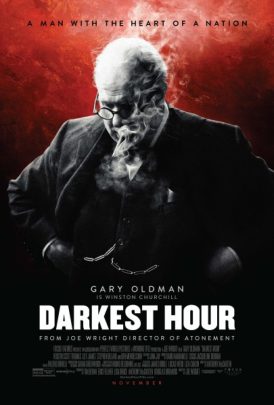 To give this film anything less than five kernels or five glowing stars, would be a travesty.  A very short period of history from May 8, 1940 to June 4, 1940 is portrayed on screen.  It focuses on the stubborn and determined man who refused to surrender and those who loved and hated him.

I don’t think I’ve seen a movie that has roused me to such patriotism even though I was born in the USA.  Perhaps it is my ancestral roots in England and the fact that my second great uncle once introduced Churchill at a meeting when he was a young conservative just elected in Manchester.  Whatever the reason, I felt profoundly moved.

The movie begins with the House of Commons calling for the resignation of Neville Chamberlain as Prime Minister due to his handling of the war.  Even though he wasn’t their first choice as a replacement, Churchill fills the position and even the King isn’t too keen to see him as Prime Minister. After accepting the position, he displays a much different view as to how Hitler should be handled. He organizes his war cabinet but soon discovers not many of them have the stomach for war and lean toward the idea of negotiating a peace settlement with Hitler.  Churchill balks at the idea but receives mounting pressure to agree or face being replaced.

At this point, I could kick myself that after two trips to London, having not visited the Churchill War Rooms after seeing this movie where much of it takes place.  Joining the cast of characters and giving strong support is Kristin Scott Thomas who plays Churchill’s wife and Lily James who plays Elizabeth his newly hired secretary.

One focused event is how Churchill came up with the idea on how to rescue the majority of British forces stranded at Dunkirk.  Later on, when faced with the decision to negotiate or stand firm, he takes the pulse of the common Londoner to see if they would rather surrender or fight.  Then he goes to Parliament to deliver his famous speech laced with the words below.  At the very end, he storms through the doors and the movie ends, making you wish you could jump to your feet and fight the war in the streets by his side.  At the end, I shudder to think what would have happened had Churchhill not roused England to stand firm.

Gary Oldman’s performance is so brilliant that mere wordy accolades are not enough. His transformation from the man he is in real life into Churchill in looks and mannerisms is astounding.  No doubt he will win many awards.

Though the latest Star Wars movie is the rage at the moment, I recommend you consider the past and the history of real men who fought against the dark side and prevailed.  It’s their character, determination, and courage that should be our true inspiration for the future.