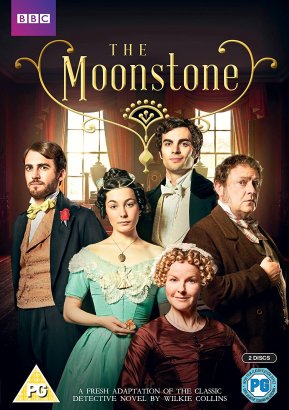 Ah, BritBox!  My second series to binge upon was The Moonstone, which is a five episode drama based on a  detective novel by Wilkie Collins written in 1868.  This tale is a classic who-done-it that will keep you guessing until you find out who-did-it.

The moonstone is actually a yellow diamond that has been stolen by a corrupt British officer while in India. The stone is revered, precious, and outrageously big.  When he dies, he bequeaths the stone to Rachel, his niece. Unfortunately, with that gift comes problems, greed, and danger.

Upon her eighteenth birthday party, Franklin Blake, Rachel’s cousin, has been entrusted to give her the stone now that she is of age. Once again we are faced with cousins romantically entangled with one another in the series as two vie for Rachel’s affections. She has a large birthday party celebration where everyone in attendance gets to see the fabulous diamond and handle it. Insistent that she merely keep it in a drawer in a cabinet in her room overnight, she discovers in the morning that it has been stolen.

The story is an interesting premises where the audience is brought along to remember the occurrences of that evening as reflected upon a year later. Franklin returns to England, hoping to win back Rachel’s heart, but he knows he must find the stone in order to do so. An interesting group of characters are all suspects, including Rachel, and the whereabouts of the stone and its current location remains a mystery. Even traveling Indian Hindu priests wanting to return the stone to India are suspects in the missing stone.

Of course, we are back in the Victorian era of cousins falling in love with cousins, and this time Rachel has two quite dashingly handsome men wanting her hand in marriage. If anything, the story kept me intrigued trying to figure out who stole the diamond, and the end has a few surprising twists and turns as the mystery is solved.

Apparently this is the second time this series has hit television, with Greg Wise being Edward Blake in an earlier BBC version in 1997. There is even another movie version in 1934, which is an American mystery film.  Who knew?  Apparently, not me because I’ve never heard of this gem (no pun intended) until I subscribed to BritBox.