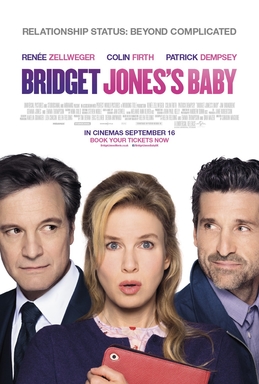 Last week, in a moment of boredom, I streamed Bridget Jones’s Baby on Amazon. I can’t bring myself to give it an entire 3 Kernel review.

Audiences have been living Bridget’s life through Bridget Jones’s Diary (2001), Bridget Jones -The Edge of Reason (2004), and now Bridget Jones’s Baby (2016).  A frank letter to producers – let this be the last.  When the first one came to the big screen, I enjoyed it.  The second one I did not enjoy.  The third one slightly tolerable.  The fourth is unneeded.

For this version, the semi-romantic comedy returns with Bridget, single again, and living her repeated failed relationship with Mark Darcy. It’s the relationship that never works, but keeps being put back together because the writers want to solidify the happy ending.  What I don’t understand, is why resurrect this story line twelve years later?

It begins with a memorial for Daniel Cleaver, presumed dead in a plane crash. Bridget attends, along with plenty of other Daniel’s former girlfriends. She sees Mark Darcy with his new wife in an awkward scene. Later on, she sees Mark again, discovers he’s on the road to divorce, and they have sex. However, Bridget doesn’t necessary want a repeat with Mark who always puts work before relationships and doesn’t pursue staying with him further.

Continuing on with her single life, she goes away for a weekend to a music festival. She meets Jack Qwant and has a one-night stand.

The slight humor begins when Bridget discovers she is pregnant and doesn’t know who is the father. She tells them both, and the fatherly competition begins between the two. When the baby is born, a DNA test is performed to find out who is the lucky winner.

Well, I won’t spoil it. Except the end comes with a marriage ceremony, and a newspaper sitting on a bench that Daniel Cleaver has been found alive. Please, don’t tell me, this means another movie is on the way.

As you can tell, I wasn’t exactly enthralled over the story. Mr. Firth is showing his age, while  Renee is showing her face lift. Patrick Dempsey, Emma Thompson, and a few other repeat regulars round out the cast.

I guess I’ll finish this post and listen to All By Myself by Celine Dion. After a while, it just becomes a way of life, Bridget.