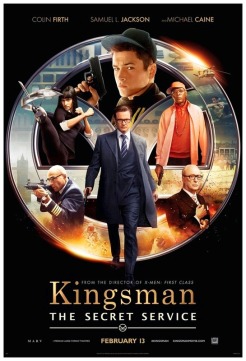 2 Kernels, But I Should Have Walked Out

Stars: Colin Firth, Samuel Jackson, Michael Caine, and Taron Egerton
Everyone loves Colin Firth — at least those women who have followed his career after falling in love with him as Mr. Darcy.  I have seen a few of his movies of late, most of which were entertaining and some well done (such as The Railway Man).  Kingsman: The Secret Service is a whole other ballgame. Frankly, it’s a movie I would like to erase from my brain due to the gratuitous violence, unparalleled to anything I’ve seen lately.  Of course, I usually don’t see those types of movies, so maybe I’m just ignorant this stuff is on the big screen all the time.
The story starts out with a fairly good premise, a bit of humor, and the usual cool spy stuff — putting aside the first few minutes of killing. Colin Firth plays Harry Hart, a knight in the Kingsman secret service. He’s good looking, dressed in a fine tailored suit, but carries quite a few nifty weapons he can use.
When one of the Kingsman is killed all the other Kingsman seek out candidates to fill his spot. Harry seeks out a young man nicknamed Eggsy, who is the son of a former Kingsman.  The young lad doesn’t have a clue what his father did in real life. Eggsy, however, is the typical juvenile delinquent in need of  reform. He accepts Harry’s offer, and joins a group of other young men and women seeking the coveted position as the next Kingsman. They are put through a rigorous training, and one by one are eliminated down to the last two — Eggsy and another girl.
Of course, while all of this is going on, we have Samuel Jackson playing the typical psychopath out to murder millions of human beings to cleanse the world of an over-crowed population. He seems to think that will cut back on our environmental problems by eliminating too may people destroying the planet.  Everything is fine up to that point, and then the movie takes a sharp left turn into violence.
In one particular scene, Harry Hart kills an entire congregation of parishioners in a church after coming under control of the villain. It’s gruesome, graphic, bloody, and disturbing. The movie continues down the road of a world gone mad killing each other, including heads blowing like watermelons shot with a bazooka, and Eggsy fighting against some woman outfitted with metal feet with swords. Bizarre.
I really enjoy Colin Firth, but if you are thinking of seeing this movie to see the handsome Englishman in a fine dress suit to swoon over, put back those dollar bills in your wallet and run the other way.  You will never look at him the same again, which actually made me wonder why in the heck he chose to do this movie.  Believe me — Fifty Shades of Grey and Christian’s red room is a walk in the park compared to this carnage.
The movie had a few good laughs at the beginning, but my brain has been desensitized to the value of human life.  Frankly, it disgusted me in the end.