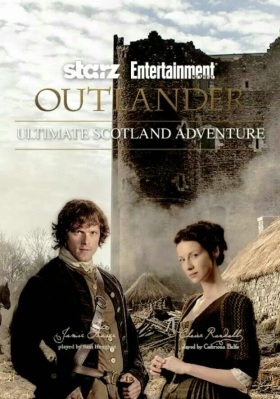 Episode four, The Gathering, is filled with fine-looking Highlanders swearing their allegiance to the clan MacKenzie at Castle Leoch. Our laird is looking a tad handsome with his hair pulled back and dressed in his finest, along with the rest of the male attendees in kilts. Once again it is an outstanding episode filled with so much that I can barely take notes fast enough to remember all the fine tidbits. Humor abounds in much of the episode, but it is toned with moments of pain and death.
It begins with Claire running through the woods appearing as if she’s escaping, when in reality she’s playing with a group of children scoping out the territory outside the castle grounds. She falls on her back and ends up looking up the kilt of Angus Mhor. He straddles above her head and peers down and says, “Something catch your eye there, lass?” The camera looks right up the kilt, but it’s too dark to see! It is the first of many lighthearted comments coming from a group of rutting men looking to “settle their cock to roost for the night.”
Claire spends the majority of this episode planning her escape. Geillis visits Claire obviously aware that she is preparing and warns her that she would do well to remember that the Highlands can be a dangerous place. Undeterred by the warning, Claire continues but meets multiple obstacles during the evening.
When Mrs. Fitzgibbons dresses and drags her to the festivities of “The Gathering,” she passes by Diana Gabaldon in her cameo role, who sputters a few words in such a thick Scottish accent that I didn’t understand a word she said. The men begin their pledges and once again the laird speaks Gaelic and Murtagh translates for Claire. You’ve seen one pledge, you’ve seen them all, so Claire leaves. She gives a spiked bottle of port to her tag-along spy, a bottle of horse dung to Leary to win Jamie’s heart, wallops Dougal over the head with a stool, and stumbles and falls upon Jamie in the stables during her grand escape gone wrong.
Finally, she gives up at Jamie’s urging and returns to the castle to watch the remaining pledges, including Jamie’s non-pledge to the laird, but his sworn obedience. (All sorts of back story on that scene, so if you need more read the book or watch the episode.) Things are friendly between Claire and Jamie, and the smoldering looks are far and few between this episode.
The next day Claire rides out with the men, who are in her words, out to “kill a hairy pig.” The hunt turns into a near-death experience for her and a disaster for two men. One of the hunters, Jody, is ripped to pieces by a boar and lies dying in Dougal’s arms. It’s a very intense and moving scene, where Dougal sees a part of Claire that leaves a positive impression. She lets her skills as a nurse comfort a man facing death.
After the emotional scene, Dougal returns with his men and comes upon a group playing a rather rough game of stick ball apparently called “shinty.” Obviously, looking for a way to let go of his pent-up emotions, he grabs a stick and joins in the game. It’s a testosterone filled, stick-wielding competition that looks more like a brawl. While watching the colliding sticks and flying bodies around the turf, you can see the obvious tension between Dougal and Jamie behind each whack and jab between the two. I won’t tell you who won that battle, only to say that it didn’t sit well with Dougal that he had taught Jamie how to play the game so well.
The episode ends with Dougal approaching Claire the next day stating as a matter of fact, which she doesn’t deny, that she has seen men die before from violence. He thanks her for helping him take Jody to a peaceful place, but then tells her she is leaving with him in the morning to travel the countryside collecting rents from the tenants. Claire sees it as another opportunity to find the right moment to flee back to the future.
The only very odd thing about this intense episode is that the background music in certain scenes is from the 1940’s big band. At first, I thought I was hearing things, but it sounded terribly out of place. It came at portions while Claire was thinking of her life in 1943, but walking through the castle. The sound track wasn’t exactly my cup of tea with modern tunes playing in a 1743 backdrop.
As someone who has only partially read and skimmed much of Outlander, I don’t find very much to balk about as far as the show not closely following the book. I am not that emotionally involved in the story as some fans (gasp) but am enjoying the television version nonetheless.  Starz is taking some creative liberty with the story, such as the ball-whacking game in tonight’s episode. In an interview with Yahoo TV, Ronald Moore stated, “I wanted to realize the book, not change the book. But it is not a democracy. It is a piece of art. We try our best to make the best version of this story for television. Sometimes that means adding scenes or cutting and tweaking them.”
All in all, it’s a four-star for me tonight and would have been a five-star had the music been a bit different.  Yes, I know.  Picky, picky.
Most tender moment: Comforting the dying man.
Most humorous statement: Claire to Leary.  “Tap your heels three times and say there’s no place like love…” Or words something to that effect, after giving Leary instructions to sprinkle the horse dung in a love potion incantation to gain Jamie’s heart.
Most disturbing moment: Blood and gore from the boar hunt.