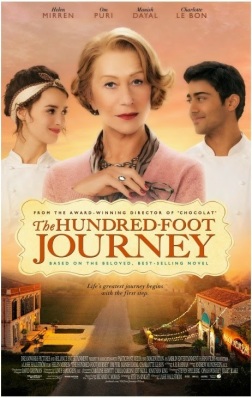 Stars: Helen Mirren, Charlene Le Bon, Om Puri, Manish Dayal, and Two Stars for Le Saule Pleureur Restaurant
This past week, I went to see The Hundred-Foot Journey with a friend of mine. I ordered my usual small bag of popcorn and small drink costing me a total of $10.05, plus my $7.75 ticket price for the 1:45 p.m. show.  It’s easy to equate the value of a movie based on what I’ve paid for refreshments and a ticket. Since this was a whopping $17.80 excursion, The Hundred Foot-Journey was worth about $7.50 in my opinion.

I’m not saying the movie doesn’t have some good qualities, which it does.  The story focuses upon a family from Mumbai, who have suffered loss and are looking for a new life. They are restaurateurs and cooks. After losing their establishment and a family member, they travel from India to London. Eventually, they move to France, complaining about the quality of vegetables in the U.K.  While traipsing about the countryside looking for a place to live, the brakes on their car fail. The head of the family, Papa Kadam, takes it as a sign that the nearby town is the place to live. Papa decides to purchase a run-down restaurant one hundred feet across the street from Madame Mallory’s famous French restaurant, in spite of his family’s objection.

The movie is about a clash of not only cuisine, but one of of ethnicity between people. Madame Mallory is not pleased with her new neighbor, who upon opening night raises the Maison Mumbai’s bright Taj Mahal entrance. A tit-for-tat battle ensues between Madame Mallory and Papa Kadam, which leads to an unfortunate incident of an attack upon the Kadam family restaurant.

Manish Dayal plays Hassan, the son who has a gift for cooking. Eventually, Madame Mallory admits that he is talented and agrees to hire him at her restaurant to further his career. A peaceful co-existence between the madame and papa ensues as the two of them begin to learn and accept each other in spite of their ethic differences.

The premise of the story is a good one with a theme of co-existence and acceptance of others unlike yourself. It also contains the elements of competition, of course, when each party has their own goals.  Madame Mallory seeks another star for her restaurant, Papa a new life for his family, and Hassan the chance to become a renowned chef.  However, somewhere during the movie, I found it  bland. The film lacked a certain spice.  It was intellectually tasteful, but the heartfelt emotion you expect from the story felt like a lukewarm plate of food.

Helen Mirren, who is never bad in anything she does, made Madame Mallory’s character.  Along with Om Puri, who played papa, they delivered a good mix of banter. There is a side element of romance between Hassan and another cook hundred feet across the street, but nothing like a spicy dish of Indian food.

It’s a three-star movie for me, 6.2 on the Tomatometer, and 7.2 at IMDb for reviews. Frankly, that about sums it up. If you’re into cooking, it’s the movie for you.