Stars: Claire (Caitriona Balfe); Jamie Fraser (Sam Heughan);
and Frank Randall/Black Jack Randall (Tobias Menzies)
Let me preface this review by clarifying a few things:
1) I have never read Outlander or any of Diana Gabaldon’s books.
2) I do not have extended cable. So any episode after this one, I will not be paying extra from my cable carrier to pick it up. Therefore, I will have to wait.
Okay, so I’ve been watching on Facebook and hearing everyone else talk about the “highly anticipated” Outlander television series on Starz. On the other side of the camp, all the Poldark lovers are going crazy over that series being redone by BBC.
I know very little about Outlander, except for what I’ve read in multiple blog posts and reader reviews. Like most stories, including mine, there is a lot of polarization regarding the story. The disagreeable reviews say this — they liked the beginning, but as the story continued were appalled by two scenes that turned them off (mainly, the rape of Jamie, and Jamie beating Claire for disobedience). Since I’ve not read those scenes, I cannot comment and will stay clear of that hot debate.
Like any other author, I dream that one of the books I’ve written will one day be acted out on screen. I’ve even had few readers state they’d love to see The Legacy Series picked up. Of course, that takes luck, agents, producers, and those who believe in your story-telling talent. Somewhere in that long line of wishful thinking lies the magic fairy of success.  I’ve yet to meet her personally. Outlander, of course is a bestseller, read worldwide, and its popularity has remained throughout the years. I can only imagine how Diana must feel seeing her story come to life on screen. It must be wonderful, as well as her bulging bank account.
What makes a story extremely popular is uniqueness. Outlander is apparently one of those novels, as it takes the reader back in time from the 1940’s into 1700’s Scotland. It contains all of the right elements – mystery, danger, surprise, handsome Scottish hunk, bodice ripping, passionate lovemaking, and a difficult decision for the heroine to make.
So, let’s talk about the free Episode 101 available to watch on the Starz website. Of course, with all the hullabaloo about this story, I decided to sit for an hour and watch the first episode. I will now probably wait a year or more to see the remainder, since I’m too cheap for extended cable adding $89 a month to my budget.
Nevertheless, I was impressed. Starz has the big budget for production, the stars to carry the parts, and the scenery to add to the flavor of the movie. It begins after the war, and five years later when Claire is reunited with her husband, Frank. The scenario is quite real, as even my parents were separated for five years during WWII, only to be reunited faced with the challenge of learning to live and love all over again.
Frank, decides on a second honeymoon in Scotland before they settle back into life. Enter a few hot sex scenes, an old village with strange practices, Frank’s interesting genealogy, and the story begins to unfold with a touch of mystery. Claire and her husband watch through the night and into the early morning hours the dancing of women around an ancient grouping of stone monuments, apparently carrying out a ritual.
Claire returns to the ruins alone the next day to look for a flower that caught her eye the day before. As she walks between the monoliths, things become a bit weird and sounds catch her attention. She is drawn to a particular stone, and after she places her hands upon it, she is transported back in time. I always ask myself, however, why is it when people travel through time they get dumped into a perilous scene with warriors and shooting? (Reminds me of the movie “Timeline” with Gerard Butler. Check out that perilous time-traveling flick.)
Besides being thrown into danger, we also have the element of surprise. She goes back to where she parked her car only to find it gone. Confused, she wanders about until she sees Redcoats who are chasing someone and shooting their rifles. Of course, she thinks she’s walked into some movie set by accident. However, as a real bullet flies by her head, it becomes all too real and she takes off running. Personally, I think I would have freaked out a bit more than strong Claire. She is feisty, swears like a sailor, brash, and lets every male she comes in contact with know her sentiments. 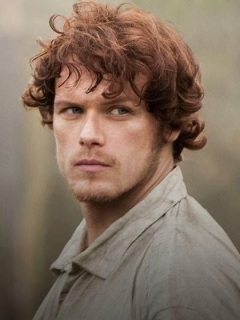 Now, let’s go to the heartthrob. Pictures of Sam Heughan have been clogging my timeline on Facebook for months. To be mean, I clog everyone’s timeline with a few shots of Aidan Turner (the Poldark hottie). Nevertheless, Jamie is quite the hunk–young, virile, strong, and well-endowed, no doubt, as women think about what’s under that kilt. With his thick Scottish brogue, you just want to kiss him to shut him up, if you don’t mind the sweat and blood on his face to get there.
As far as the rest of the burly Scottish men, Jamie is the only thing worth drooling over. If you have a good imagination of greasy hair, sweaty faces, and bodies that probably haven’t bathed in months, you’ve got the picture of the other men. Of course, Claire is a muddy mess, too, at this point in the story so she fits right in.  When she tries to run away, Jamie catches up to her and demands she continue on with them.  She says no, and he says, “I’ll shall pick you up and throw you over my shoulder.  Do you want me to do that?”  Well, I know you do!
Has the first episode intrigued me? Yes, and when I can, I’ll probably watch the remainder. Will I read the book? Nope. I have this terrible aversion of other people’s ideas, phrases, and whatever else sinking into my subconscious and coming out in one of my own books. Therefore, I rarely, if ever, read any romances by other authors.
As far as the intro music, I absolutely love it. Need to find out where I can download it. “Sing me a song of a lass that is gone…”

So that’s it! Go for it, you Outlander fans! I’ll being waiting for Poldark on BBC Masterpiece Theatre slated for 2015 release with Aidan – picture stage right.
In conclusion, I supposedly do have a drop of Scottish blood in my veins from my second great grandmother, who was born in Glasgow—so there.

Next trip to the UK, I’ll make sure to make it up north to Jamie land. Maybe I can get sucked back into time. As long as I don’t end up in the middle of a battle somewhere, I wouldn’t mind.

Yeah, yeah, yeah, I know I said I wasn’t going to get Starz.  And, yeah, yeah, yeah, I said I wasn’t going to read the book.  I’m eating my words.
I’ve added Starz for $10 a month from Comcast and downloaded the book on Kindle.  I’ve read about 70% of it, but because of my schedule, I’ve had to skim parts but have read a pretty hefty portion.  I’m impressed with the author’s skill and knowledge.  There is no way, however, I can read the entire series, but have skimmed the synopsis of each to get the drift. I will, however, be tuning in on my brand new 32″ Magnavox for upcoming episodes.