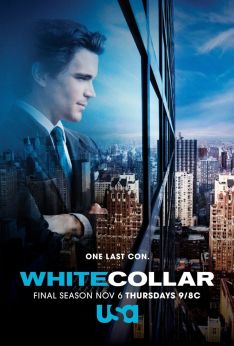 I will admit that often I ignore some of the shows that Netflix recommends to me.  Probably for the past six months or more, I’ve consistently passed over White Collar after reading the synopsis.  It just didn’t interest me. I’m not a crime buff.
Okay, I know this is going to sound really lame, but after reading Fifty Shades of Grey and women thinking that Matt Bomer would make the perfect Christian Grey, I decided to see what all the hullabaloo was about over this good looking guy (who is gay, by the way.)  As a result, I started watching White Collar.
Instantly, I got sucked into a show that I thought I would never be interested in.  Matt Bomer plays the con-man Neal Caffrey, who cuts a deal with the FBI to shorten his prison time if they allow him to work as a consultant with the guy who put him behind bars in the first place.  Peter Burke, played by Tim DeKay, is the agent that decides to give Neal a chance.  Of course, he’s on a tight leash with a tracking device around his ankle that only gives him a two-mile radius in New York City when he’s by himself.
What can I say about this show? For someone who is NOT into crime shows, White Collar is probably the best show I’ve seen in a long time. It’s my type.  Why? The violence is very tame, there’s no cursing, the sexual situations are tempting, but there’s no graphic sex, the suspense is a killer at the end of every episode, and the characters are people that you fall in love with and become emotionally involved in their lives. Besides all of the above, the relationship between Peter Burke and Neal Caffrey is a joy to watch.  You get so attached to them both, that you sit there and worry about each of them every episode.

Frankly, after watching this show, I think I missed my calling as a writer for a  TV show. Bravo to those that pen this fantastic series. Every episode, of course, focuses upon another white collar crime and bad guy that needs catching. However, every episode is rich with undertones of the secondary story of Neal’s loves, life, secrets, and struggle to go straight. Peter’s underlying motivation is to see Neal, who he has become friends with, turn away and leave the life of crime. The questions looms, once a con man, always a con man? You should tune in to find out.
Seasons one through three are currently on Netflix.  I quickly devoured each episode.  Season four is for purchase on Amazon, which I’m watching now.  Only two left to go and then I’ll be in the desert with no Neal Caffrey, Mozzie (his side kick), Peter’s wife, and the rest of the cast.  Love them all!  White Collar was picked up for Season 5, but alas, I don’t have USA Network.  I may have to remedy that situation come January.
Anyway, as usual, I’m probably the last to stumble across this treasure of a television program.  If you are a late comer, like me, take note. You won’t be sorry.